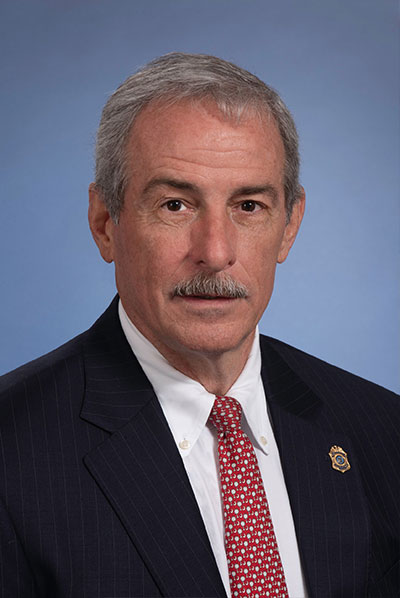 Chief Keel received his Bachelor of Science degree in Criminal Justice from Georgia Southern University in 1979. While at SLED, he earned a Juris Doctor degree from the University of South Carolina School of Law in 1995 and is a member of the S. C. Bar. He is a graduate of the S. C. Criminal Justice Academy, the FBI National Academy, and the FBI National Executive Institute.

A native of Barnwell, S.C., Chief Keel is a veteran law enforcement officer having more than 40 years of service. His interest in law enforcement and public service began at an early age when, as a teenager, he served as a volunteer firefighter for the Barnwell Fire Department and as a member of the volunteer rescue squad. He later served with the Orangeburg County Sheriff’s Department and the Barnwell and Denmark Police Departments before joining SLED.

Chief Keel rose through the ranks at SLED, being named Chief of Staff in December 2001. Prior to assuming that position, he was a Captain for eight years in command of tactical operations. In that position he supervised SLED’s Aviation Unit, Bloodhound Tracking Team, SWAT Team and Fugitive Task Force. He also served in the agency’s Narcotics Unit, on the Lt. Governor’s Executive Protection detail, as a SWAT Team member, hostage negotiator, the Bloodhound Tracking Team, and SLED Aviation Unit. He is a commercial helicopter pilot and has served as a certified firearms instructor, driving instructor, and hostage negotiation instructor. Chief Keel has been a Commission on Accreditation for Law Enforcement Agencies (CALEA) Assessor since 1994. He served as the Accreditation Manager of SLED from January 1996 through June 2008.

He is currently President of the Association of State Criminal Investigative Agencies (ASCIA); Co-Chairman of the state’s Commission on Advancement of Public Safety; past President of the S. C. Law Enforcement Officers’ Association (2015/2016 and 2003/2004); and former member of Lexington-Richland School District 5 School Security Committee. He serves on the Lexington-Richland School District 5 Superintendent Emergency Response Advisory Council, the Advisory Board at the Center for Advanced Technical Studies in Lexington-Richland School District 5, and Co-Chairman of the Opioid Emergency Response Team. He also serves as South Carolina’s Homeland Security Advisor and chairs South Carolina’s Law Enforcement Training Council, which is the governing body for the S. C. Criminal Justice Academy. The S. C. Baptist Convention’s Christian Life and Public Affairs Committee named him as the recipient of the 2017 Public Servant Award. Additionally, he was recipient of the S.C. Law Enforcement Officer of the Year Award in 1990 and the Strom Thurmond Award for Excellence in Law Enforcement in 2000.